When asked where Shez Jackson has been the last few days, PreciousP tries to fob people off with ‘it’s Ramadan’ as the excuse. Hmmm, well considering Ramadan doesn’t even start till the 29th June, and this was on the 23rd, those of you who follow this blog or know Shez, will know he just doesn’t stay away from his computer for anything…even his sick wife.

So knowing he will of been there ghosting, i decided to tempt him to respond, so that people will know he’s still there.

Getting these guy’s pissed is probably the easiest thing online. 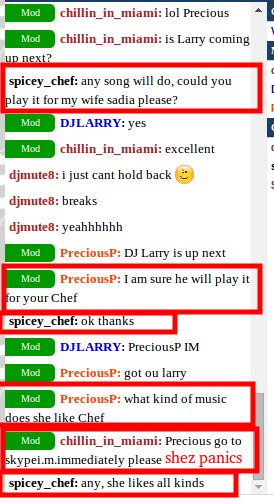 See how quick he gets mad when i say play a song for my wife Sadia 🙂 Sadia is his wife’s name, so within seconds he must of got hold of Ben on Skype and said ban Spicey_chef lol, Ben reacts like the world is going to end, frantically trying to get hold of Precious on Skype. 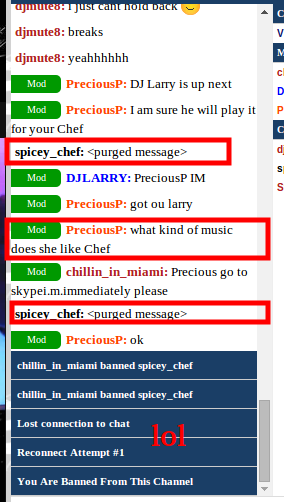 And there it ended, as quick as that lol. You see, Shez is so predictable, you know he is never away from Vaughn, no matter what. He just has this little problem of bullshitting all the time. So over to the other tab to see what was said after the banning. 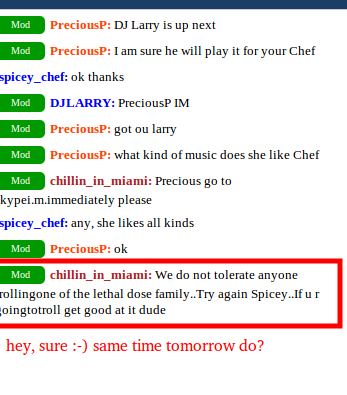 So just incase there is any doubt that Shez was there, lurking, i wasn’t trolling, i was polite to them all, but as soon as there is mention of Sadia, he gets them to slam down that ban hammer. Nobody else in there would know who she is as there’s no mention of surname or mention of Shez 🙂