Seriously though, one can sense a divide between the original warriors. Shez tries to claim that everything is ok between him and John. 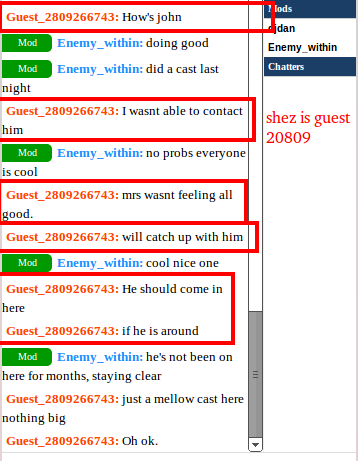 Ok, let’s break this down. Notice how Tom knows John is ok but Shez doesn’t. Shez then claims he’s not been able to contact John because his wife isn’t feeling well. The only thing with that reason is, Shez is always on his pc, so why couldn’t John just Skype call him, or vice versa?

Now let’s just assume one of them for some strange reason doesn’t have Skype installed anymore, what’s wrong with just calling him on his mobile? Shez always has his mobile by his side, as you will see when he’s casting, his wife rings him from downstairs to get hold of him, so John can’t do the same? 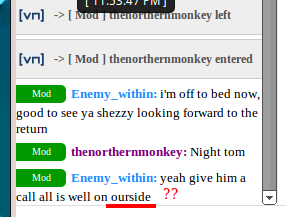 Hmm, on ‘ourside’ now they will deny it till the cows come home, like the way Tom always says john did a cast ‘last night’ lol, it’s always ‘last night’, never like, a couple of days ago or at weekend etc.

All bullshit of course, but reading that chat, it looks like the main player and the 2nd in command have had a tiff and are not speaking, grandad wanting to control the group maybe??

Who know’s, but it’s fun watching 🙂

One Thought to “Shez Reveals His True Feelings Towards John”