This guy has got to be one of the most irritating c*nt’s on the internet. He used to be a fairly normal bloke at one time, but since everybody has been modding him, he’s suddenly become this power crazy little Hitler. 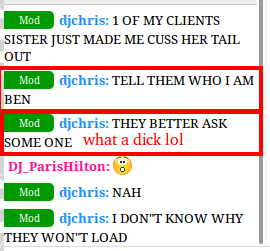 It was funny in FoxmanShawn’s cast this afternoon, Chris was a mod, and as usual, was banning everyone who didn’t kiss his ass, then Shawn had enough, took his mods and allowed the guests to say what they want….to say he got savaged is an understatement 🙂

It seemed like everyone just piled in the room just to be able to abuse him and know that for once, his power had been cut off.
After 10 mins or so, he ran off like the little bitch he is, back to LDR for some much needed ass kissing.