Ever had those feelings that any caller, anyone who say’s hi, anyone that walk’s by you is the same person?

No, me neither, but maybe that’s because we aren’t hilariously paranoid. Then we also have Richard and Ryan (lol) who are convinced that every person on VaughnLive is Soultrain. The conversation between the two was motoring along, as boring as ever, then some viewer actually logged in, didn’t say anything, then logged out.

Probably nothing more than an innocent viewer just flicking through the casts as lot’s do, but when you are as insecure as these guy’s, it can only be one person… 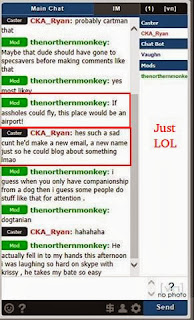 Hey guy’s, maybe it’s time you considered giving these a ring  click me if you’re a UK Invader

One Thought to “The World Where Everyone Is Soultrain…”