It seems that the blog has upset our resident buffoon NorthernMonkey, so much so, he’s now having a go at Scotty. What for you may wonder. Well, our little 8 stone gigolo must of been watching the Soultrain cast on Friday when Scotty came in and explained he didn’t mean to offend anyone, he just want’s to do his own thing.

We have known all along that that’s all Scotty want’s to do, come on and cast and go to bed, not get involved in all the backstabbing and name calling that the other emptyheads do and as this was explained to him in the cast, it appears Ricky didn’t like that and thought Scotty should of stayed out, or at least come in and give some abuse. But because that didn’t happen, he’s now foaming at the mouth like a rabid dog, calling Scotty all sorts of names and threatening to take his name off banner number 245 and even…wait for it….make a new channel, to which only 4, yes not 6 , not 5, but 4 of them will have the stream key. 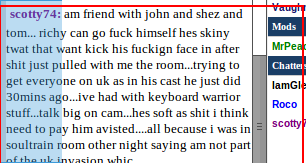 Keep checking back for more giggles when they move over 🙂

One Thought to “Richard A Tad Upset….”